I spent a solid 6 years of my life competing in the Home-school Legal Defense Association debate league, a network of Home-schooling students ranging from junior high to high school age that would participate in competitive debate tournaments around the country. Each team of debaters had mountains of evidence, meticulously filed so as to be accessible at a moment’s notice. Every variable had to be considered and thinking on your feet was a necessity and I was terrible. Throughout my career I tried to convince judges that sprinkling a powder of dust over the border would help identify individuals that had entered the country illegally, I tried to create a new prohibition on all tobacco products that would come into effect instantly and I used marketing material to mandate using synthetic motor oil the only legal option for automobile owners in order to reduce dependency on foreign oil. Seriously, I walked into each room with the confidence of a Trump and walked out with the shame of a Nixon. But it was fun. I was given grounds to argue and disagree with all hostility remaining solely in the confines of the debate room. Because of the fun that arguing can be, I was pretty excited to hear about the game The Great Debate.

The Great Debate takes the hours long process of formal debate and condenses the arguments into 60 second rounds. Each player gets two cards, one marked “A” and one marked “B”. A player is then selected to start. They draw a card from a deck with a topic listed at the top and “A” and “B” sides to argue. For example the card could read:

The top left corner of the card lists an ice breaker question to determine who your opponent will be (Whoever went to bed the latest, The person whose name starts with a letter closest to the letter R etc.). Once an opponent is determined, each player is given 30 seconds to argue their side, regardless of if they personally agree with it or not. It is then up to the non-debating players to choose their “A” or “B” cards in secret and simultaneously reveal them to determine the winner. Voting is to be based on who argued the best and NOT on personal opinion. Play the question deck is then passed to the right and play continues until a player has won 5 debates… or until your done playing. 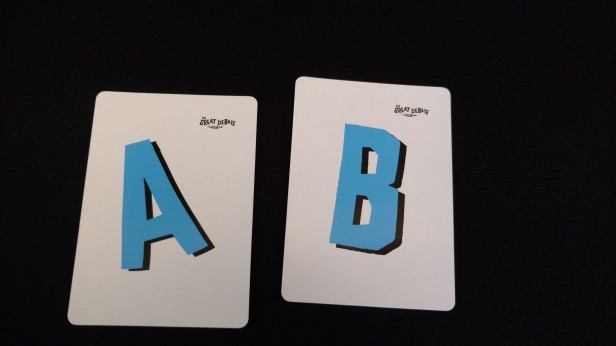 The Great Debate is very much a performance style party game, which you’ll know right off the bat if that interests you in the least. It’s not uncommon for people to be petrified of public speaking. It’s also not uncommon for people pining to make a fool of themselves in front of friends and family. So, this is a game about putting yourself out there and arguing, but only for 30 seconds at a time. This is essentially a game of table topics that can be played in large groups for group entertainment or in smaller, more close knit groups. Regardless of what you decide there are two things that became apparent to me about this game. 1. It works. 2. Some people will still dislike it. The Great Debate is one of those games that can be very polarizing. It presents all it has to offer up front, which is great, because this really is a game that can be judged by its cover. I enjoyed it and a number of other people I played with also really enjoyed it. There were also a number of people I played with that didn’t enjoy it. It relies heavily on who you play with, and in the right circumstances it can really shine. It’s a solid little game that has a lot to offer if your group has a lot to give.

The questions themselves can offer some really interesting conversations. They’re split into three categories and color coded as such on the face of the card. Green are fairly harmless questions that seek to spur debate but not make anyone particularly uncomfortable. Yellow offers to spice things up just a tad, maybe throw in a little controversy to stir the pot. And at red you’re debating the merits of physician assisted suicide. I appreciate the different levels and how easy it can be to separate out the ones you may not want in with a particular group. Personally I wish there were more of the red questions as they weren’t particularly crude or offensive, but they make the players think in different ways and defend something they may disagree with strongly in real life. Most of the questions on the cards are pretty solid, however a number of them rely on the players having a wide breadth of pop-culture knowledge, which can be confusing if you’re not familiar with the legacies of particular sports franchises or you weren’t really a Trekkie. These can be easily skipped, but they show up a little too often. Finally, the competitive nature of the game is fun, but it’s just as much fun to let the game run it’s natural conversational course, focusing less on getting points and more just on playing for laughs.

Cons
It’s polarizing, people will love it or hate it.
Some of the questions can be confusing or fall flat.
You really need more than the recommended minimum of three players for this to work.

Pros
With the right group this game can be a blast.
A large number of questions allow lots of replay-ability.

This is a game I would recommend with caution. If it sounds like a game you would enjoy, you’re probably going to enjoy it. It can be a lot of fun to be arguing frivolous topics like time travel movies in one round and much heavier ones in the next, especially having to watch and come up with arguments on the fly. It allows for that controlled argument burn that’s exciting while still being safe in the confines of the game.

Depending on the date you’re reading this, There is a stand alone expansion for The Great Debate on Kickstarter! Check it out here: https://www.kickstarter.com/projects/1730079604/the-greater-debate?ref=profile_created