Nothing screams justice and fair trial like good old fashioned mob mentality! In particular, Witches have a difficult run of this mind set. We’re tossing them in lakes one moment and cheering for them as they defend their charming little school on the big screen the next. It’s certainly an interesting dynamic, muggles, no-maj’s, villagers, whatever you want to call the non-magical beings, there tends to be, in fiction a certain level of fear or animosity towards the creatures. But is that fair? In the case of Witch Hunt it absolutely is fair. Not only are these beings wielders of incredibly powerful magic, but they’re also showing some seriously serial killer-esque tendencies, to the point that they’ve decided to kill one non-witch every single night until they’re all dead. So grab your pitchforks and torches, it’s time for a good ol fashioned Witch Hunt.

This game is Werewolf. Or Mafia. Or really any whatever flavor of large group social deduction game you prefer. There are good guys and bad guys. The good guys have to find the bad guys before a certain goal is met. In this case the extermination of the village. I grew up playing a very similar game called Mafia that we simply played with a deck of cards. In this game, All players are given cards that identify them as a Witch or a Villager (or a holy player, which is, for most purposes, a villager). Now, the version of Mafia I’m familiar with throws in maybe two extra characters that can sniff out the villains or protect someone in the night. That’s it, everyone else is left up to their own devices and if you die, you die a boring villager. Where Witch Hunt differs is that every single character not only has an alliance, but they have a character with a special ability. Everyone is a unique character that can drastically change the dynamic of the game. Night falls, the Witches wake up and choose who to kill. Then they go back to sleep and the Priest Wakes up and makes a silent accusation. This continues with a wide number of potential roles. On top of that, if you die, you’re still in the game! Thus eliminating the biggest problem with these types of games, because it’s far less fun if you’re just sitting and watching the game. This is The social deduction game, perfected. Or so the box touts. 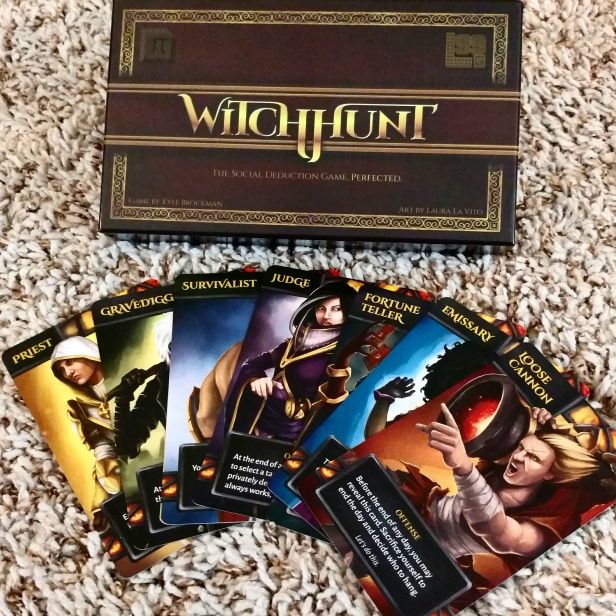 First, the good. The game components are fantastic. Not only are there beautifully illustrated cards for every character and role in the game, there are duplicates of each in tarot sized cards so you can see which characters are in the game by arranging them all face up in front of the players. It’s a really well thought out addition that makes a complicated situation much simpler for the players. Adding the afterlife element of the game makes up for dying early on as well. No longer do you have to sit back and watch the game unfold; dead players now become a pivotal role for their team, either deceiving the town clergy or protecting the innocent villagers. Every player has something to do and the game runs so smoothly for them…assuming the moderator knows what they’re doing. 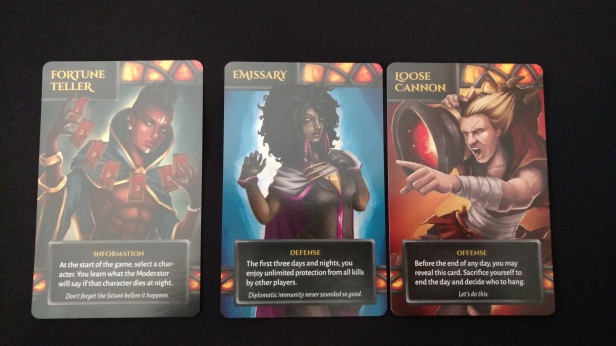 Here’s the deal, you can’t call this game perfected if the moderator player is essentially playing their own little book keeping game. It shouldn’t be difficult for the moderator, it needs to be dead simple, and Witch Hunt is not. With the vast number of specific roles and orders in which teams wake up, it can be pretty difficult to keep the game moving at a brisk pace. The saving aspect here is the free webapp provided by level 99 games, which is really great. It walks you through everything. However you have to have everything set up and input player names AND roles AND alliances in the app in order for it to work properly. If you can manage to facilitate all that, you’ll be golden!

The game is fun. It revitalized a genre for me that I had contemplated giving up on. The roles all have unique and exciting abilities, the suspense is just as thick as ever with suspicion and betrayal. It forces a level of interaction that’s rarely seen, but it doesn’t do so unnaturally. My only gripe is the clunky nature of the phases that HAVE to be performed perfectly by the moderator. I haven’t attempted to run this game without the app yet. I honestly don’t know if I want to. They provide scripts, and I really should give them a shot, but it seems more of a hassle than necessary. Still, the game is fun, and if you can get a moderator that can use the app efficiently and wrap his head around everything you’ll have no problem tracking down some witches.

Pros:
No player elimination.
The game is fun and exciting all the way through.
The art and graphic design is top notch.
There are a lot of really cool special player powers.